Tucked away in Jubilee Hills, this bright blue food truck is a treasure trove of satisfying Persian gourmet sandwiches and marmalades

“Feroza, but with a darker blue,” is how Arash Naseeruddin describes the pretty blue of his Sofrehh food truck. You might miss it if you don’t look closely enough because this eatery that’s growing to be the latest talk of the town is in its own little alleyway — but it’s not as seedy as it sounds.

I had first spotted Sofrehh in late March when it had first opened, its first post near the new Conçu in Jubilee Hills. Then it wasn’t there anymore. I had shrugged my shoulders and had assumed it had either moved or gone bust — it was the the former. And boy, what a sweet set-up. 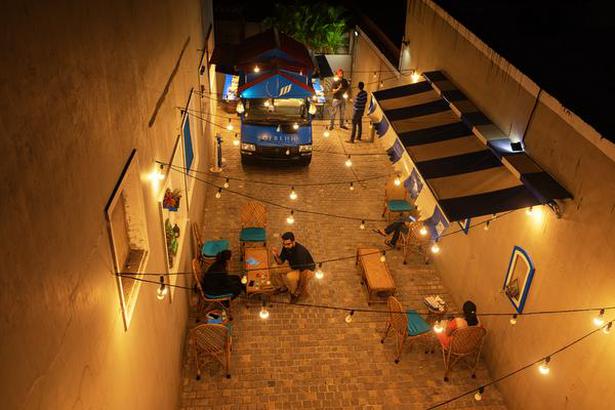 An aerial shot of the alleyway where the Sofrehh food truck sits; next to Rangoli on Road Number 36, Jubilee Hills in Hyderabad   | Photo Credit: Sanjay Borra

In the small alleyway space by Zasya, Arash and younger brother Abdul Moiz set up streaming lights above a sit-out area by the truck complete with canopy covers for the occasional rainy day. The warm light accentuates the blue of the truck, of the blue accents on the walls and the feroza-coloured cushions set upon the cane furniture for that travel-esque Mediterranean feeling.

Arash and Abdul put their heads together a couple of years ago to bring life to an age-old dream: an eatery that succinctly envelopes the best of Persian sandwiches, inspired by their Iranian mother. Sofrehh is derived from the Persian word sofreh, the cloth spread on the ground upon which diners sit and have meals. It’s a name evocative of a homely and cosy feeling; the extra ‘h’ is to differentiate this establishment from an existing Persian eatery in New York. The logo, which may resemble an herb, is actually the Parsi symbol for the letter ‘s’. Plus, the minimalism of the van’s decor keeps it classy. 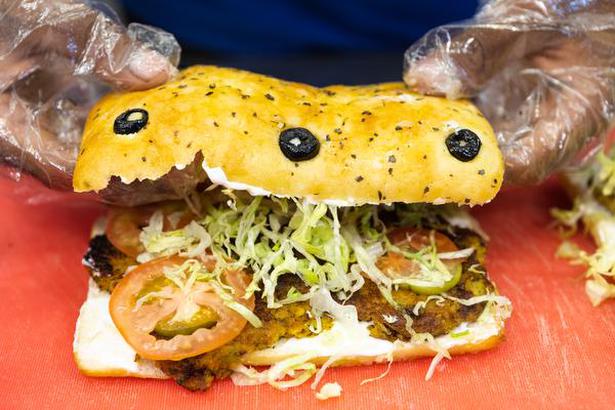 The kubideh sandwiches at Sofrehh are a rite of passage for meat-lovers. Laid with fresh tomatoes and vegetables with a small dash of mayonnaise, the tangy lamb patties really sing. The cutty murgh variety teems with flavour that doesn’t leave an unpleasant aftertaste… quite the opposite actually.

For vegetarians, the veg falafel is an easy go-to, but the more adventurous lot should try out the penir olivieh, a cold sandwich as per the olivieh suffix filled with various vegetables and fresh cottage cheese. The meatier equivalent is the murgh olivieh, which has chicken potato and egg salad.

And the bread — oh, my! Arash and brother have carefully sourced a baker in Hyderabad after hunting for a very long time. A fresh batch of delightfully light and soft Mediterranean black olive loaves comes in everyday to match the freshness of their ingredients. According to the menu and the brothers, the bread is all-organic and preservative-free.

To enhance your Sofrehh experience, Arash recommends coming at 10pm when the passing traffic is pretty much non-existent and all you can hear is the jazz music from the portable speaker they keep on hand and the buzzing conversation from other customers.

While I’m yet to try the homemade marmalades and the Batsam coffees, I’m sure I’ll be back — with an emptier stomach.

Solo in her SUV

Yoga for ankle and foot mobility